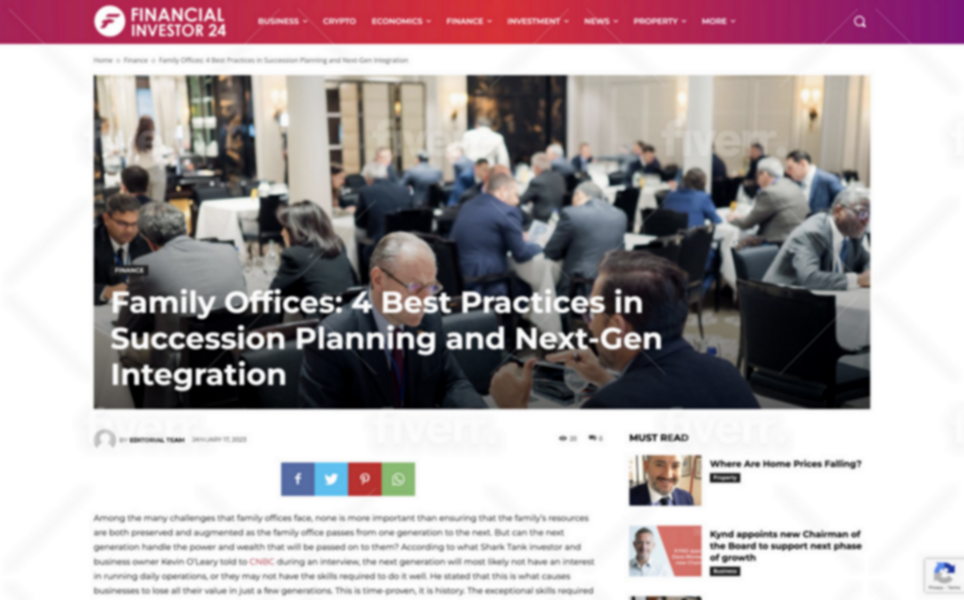 Among the many challenges that family offices face, none is more important than ensuring that the family’s resources are both preserved and augmented as the family office passes from one generation to the next. But can the next generation handle the power and wealth that will be passed on to them? According to what Shark Tank investor and business owner Kevin O’Leary told to CNBC during an interview, the next generation will most likely not have an interest in running daily operations, or they may not have the skills required to do it well. He stated that this is what causes businesses to lose all their value in just a few generations. This is time-proven, it is history. The exceptional skills required to run a business are becoming really hard to find. But, beyond strong leadership, you need to have a written succession plan and feedback from the older generations in order to sustain the success of a family office. As experience has proven, a few unwise decisions can truly unravel a lifetime of hard work. So, follow these succession planning best practices to ensure a seamless and untroubled generational change within your family office.

Although severely overlooked nowadays, emotional intelligence is a must when preparing for the challenges that will come with succession planning and generational change. According to the psychologist and science journalist Daniel Goleman, the concept of Emotional Intelligence is comprised of the following components: self-awareness, self-regulation, internal motivation, empathy and people skills. People who possess these traits are better suited to analyze their current situation as a whole and take the best course of action for a situation based on logical decisions instead of letting their judgment be affected by others. As Marta Albert, Principal at QG Family Office, UK, said at a Family Office Gathering hosted by the Global Investment Leaders Club, the biggest issues during the transition of power and wealth come from the absence of emotional intelligence within a family and not from the financial side. This, in turn, can lead to unstable relationships within the family office due to miscommunication between the current leaders and the next generation. The key to developing emotional intelligence is to practice and incorporate these five components into the family office and the family dynamic to ensure straightforward and organized relationships between the members during the transition.

Differences Between Generations and Capital Loss

All family offices can agree that preserving family wealth beyond a few generations is not an easy task; in fact, there are statistics that back up this narrative. According to the Williams Group wealth consultancy, 70% of wealthy families lose their fortunes by the second generation, and a stunning 90% by the third. The idea of transferring considerable wealth and power to children and grandchildren generates concern for many heads of family offices. It is estimated that ¾ of family office leaders are skeptical that the next generation may not be adequately qualified to manage the family office and family fortune, which leads to some disagreements within the family office in the long run. As Guneet Banga, Executive Director for The Caravel Group, Hong Kong, a member of the Global Investment Leaders Club, said during the Family Office Gathering, one of the biggest challenges in generational change for family offices is setting the differences apart between the older generation and the recently integrated one. During this process, they will most likely run into a disagreement on how the family office should operate going forward, despite all the safeguards and guidance that are put into place, as they may have different interests. A survey of 200 family offices conducted on behalf of BNY Mellon Wealth Management, found out that, out of these 200 family offices, 45% say it is more difficult to engage with the next-generation leadership because of conflicts of ideas. Acknowledging this will allow family members to mentally prepare and plan appropriately for these events. Guneet noted that maintaining good communication, keeping healthy family dynamics between generations and having the patience to sit down and understand the other’s point of view with a more analytical and systematic approach is the right way to handle this problem.

Preparing the heirs is one of the most crucial steps when planning to integrate the next generation of leaders into a family office. Unfortunately, it is still one of the most neglected parts of the inheritance process. What can be generally observed is that the focus is often shifted entirely to the current heads of family offices, which are the givers of wealth. Instead, the attention should equally be on the receiver’s side by preparing them to manage the family office as well as the family business. As one of the young next-gen said at the closed-door single-family office gathering: “Parents should immerse the young generation in the family office business and life starting from their birth. Only then will it naturally grow on them. If family leaders introduce it later — it will be too late for children to be genuinely engaged.” The heir’s preparation should consist of a methodology that aims to help family offices better communicate their values and traditions and how they want the heritage to be managed by the heirs. As Russell Deakin, MP at Aceana Group, US, a speaker at the Global Investment Leaders Club gathering for family offices commented: “It is very important to introduce the heirs to a business-like environment starting from their youth. Make sure to give them an opportunity to participate in some investment decisions when preparing them to inherit a family office, instead of forcing them to be there.”

Setting Up a Plan

One of the most important steps in a great succession plan is to have the strategy written down. It may look simple, but this practice is more uncommon than one would expect. The Global Family Office Report 2019 revealed that 22% of all family offices don’t have any formal written documents regarding their succession strategy. In fact, 12% are merely informally-agreed written plans, while 10% are just verbal agreements without any written documentation whatsoever. According to Rosplock’s Handbook, this happens because, with seven out of ten family offices led by members of the family, many heads of family offices are uncomfortable with succession planning as “it requires one generation of leaders to recognize their own mortality.” Thus, it is required for the older generation to come to terms with the transition period. And for that, current heads of FO need to be sure that the new generation will continue to uphold its values and traditions. Therefore, it is worth keeping the outgoing executive as chair of the board or staying as a mentor to the new executive for some time after the transition. This allows the previous leader to provide their successor with valuable insights and also visibly establishes the new executive in the leadership role. So, once you have a succession plan in mind, make sure to write it down and introduce it to the young generation when the inevitable transition happens.

To summarize, the key element to truly set future generations up for success and ensure a prosperous and fruitful generation transition rests completely with the senior leader’s ability to manage healthy and constructive family dynamics. Besides that, it is also vital to analyze the procedures that will be used in the decision-making process during and after integrating the new generation; delegating responsibility and control to future leaders while advising them on what would be the best course of action to take going forward. Preparing and implementing the next generations will never be an easy task, but following these key best practices will ensure that your family office will keep running smoothly during the transition of this generation and the generations to come. These precious insights provided by heads of family offices were only made possible thanks to their participation in the Family Office Gathering hosted by the Global Investment Leaders Club.

This article was featured on Financial Investor.

By Admin|January 18th, 2023|NEWS|Comments Off on Family Office Best Practices

About the Author: Admin